Bethabara Historic District  near Winston Salem encompasses the surviving buildings and archaeological remains of a small Moravian community, that was first settled in 1753. Located in present-day Forsyth County, North Carolina, it is now a public park of the city of Winston-Salem. It was designated National Historic Landmark in 1999.

Bethabara (from the Hebrew, meaning “House of Passage” and pronounced beth-ab-bra, the name of the traditional site of the Baptism of Jesus Christ) was a village located in what is now Forsyth County, North Carolina. It was the site where twelve men from the Moravian Church first settled in 1753 in an abandoned cabin in the 100,000-acre (400 km2) tract of land the church had purchased from Lord Granville and dubbed Wachovia. 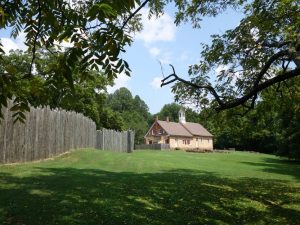 Its early settlers were noted for advanced agricultural practices, especially their medicine Garden, which produced over fifty kinds of herbs.

Bethabara Historic District is an area in Forsyth County, North Carolina. It is located at the northern end of Bethabara Park and contains a collection of 18th and 19th century structures. From 1753 to 1762, Moravians of German descent lived in the town of Bethabara (pronounced “Beh-tha-bahra”), which means house (Beth) of passage (abar). The industrious Moravians developed mills, forges, farms and roads; established schools; built churches; printed Bibles; developed medicines; planted orchards; distilled alcoholic beverages; made shoes, clothes and wagons; produced furniture, musical instruments and tools; wrote music and books (including early geological surveys); taught artisans skills needed to build and maintain their own community; experimented with crop development, including the growing of medicinal plants for sale to the local apothecary; counseled troubled souls; and baptized over 1,000 new converts.

The people were skilled in the arts, crafts and sciences. They constructed their own buildings; made their own shoes, clothes and wagons; farmed the land using advanced farming methods for that time period; distilled alcohols for various purposes including medicinal ones; worked with wood-working tools to construct furniture, etc.; formed iron works to produce nails, pots/pans, cauldrons, chains, axes, hoes, plows and other items needed by them but which they could not afford to purchase because of lack of money or trade possibilities or both. And many aspects of this town’s history are preserved today throughout Bethabara Park.

Bethabara was never meant to be a permanent settlement. It was intended to house the Moravians until a more suitable location for a central village could be found. Just six months after arriving in Wachovia, the Seven Years War (known as the French and Indian War in America) began in western Pennsylvania. The violence quickly spread to southwestern Virginia and western North Carolina. Bethabara hosted a large number of refugees until 1761. The establishment of a central town was delayed for thirteen years because of the growing Moravian population and hundreds of refugees.

Once it was felt safe to do so in 1766, the central town, Salem was begun. Many of the buildings in Bethabara were dismantled, and used for the new structures in Salem. As the houses were taken down, the small rootcellars were pushed in and filled.

With Salem completed in 1771, the official seat of government was transferred from Bethabara to Salem. Only a few residents remained behind. Bethabara became a farming community which supplied food to the other Moravians towns in Wachovia.

In 1788, a slave, Johann Samuel, was made superintendent of the farm. He was freed in 1801, after 50 years of servitude to To the Moravians. Bethabara continued to decline. The principal industries were farming and pottery, well into the 1850’s.